When my friend announced that she was having a baby, I was filled with glee. Not just because I was so happy for my friend and her fiancé, but because that meant I got to knit something for the wee one.

My friend is a knitter and has lots of other knitting friends, so I knew that she would be getting lots of knitted gifts for her first born son. I also knew that meant I needed to pick something that would be extra special. I thought about a blanket, but I had heard through the grapevine that she was getting a blanket as a group gift from some of the other knitters. I also thought about a sweater, but he was expected last week and it would be too hot for him to wear a sweater right off the bat. So I settled on a stuffed toy.

I had made the Monkey Jacobus by Annita Wilschut for my nephew a few years ago and it was a hit, so I knew this was the pattern I was going to knit. I absolutely LOVE this pattern. It is knit all in the round, which means no sewing of tiny parts when you are done! The thought of doing intarsia for the face in the round scared me to death, but her directions and photos make it not only crystal clear…but a snap to knit. 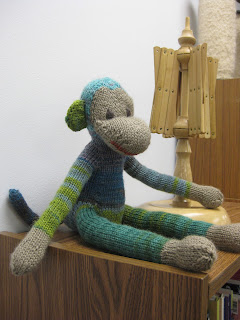 I use Liberty Wool Print in color 7821 Caribbean Tidepool, which is a great baby boy color. It is made up of blues and greens. It’s one of those colors that isn’t too soft or too bright. I decided to not try and match up the prints too much and just let the yarn do what it wanted to do. And I love the way that each of the monkey's appendages are different colors because of that. I think it gives the little guy a sense of whimsy. For the face and paws I used Liberty Wool Solid in 7836 Taupe. I wanted something that would coordinate well with the print, while standing out on its own. I found some scraps of a dark orange to make the mouth and some dark brown to embroider the eyes (safety first – nothing that the wee one could possibly pull off and put in his mouth). And since he is made from Liberty Wool, my friend can pop the monkey in washing machine when he gets dirty. 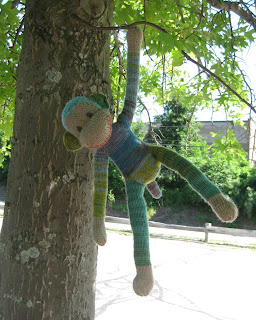 I really hope that the yet-to-be born little boy loves the monkey as much as I do and that they become best buds.


P.S. Wee one – you were supposed to come last week. I think your mom would appreciate it if you made an appearance soon!
Email ThisBlogThis!Share to TwitterShare to FacebookShare to Pinterest