You know it’s unofficially fall when you go to your LYS and see a plethora of new knitting magazines on the table. For me…it really is the happiest time of the year.

Just thinking about all the wooly goodness (not to mention alpaca and angora too) excites me. When I imagine myself curled up in my favorite chair with my needles, a ball of my favorite yarn (right now it’s a tie between Fresco, Mohawk Wool, Magnolia and Alpaca Sox) and a knitting magazine - it sends me into another stratosphere.

One of my favorite things to knit is hats. I always have multiple things on my needles and seem to have a problem with not finishing things (sad, but true). However that is not the case with hats. Since they are small, they go a little faster and I am able to complete them - even with my short attention span. I also love that (for the most part), they don’t require any finishing. No seams, just a few ends to weave in and I am done! But I think the thing I love most about making hats is that they can be simple stockinette, complete cables or even fabulous Fair Isle.

Carolyn picked two colors of Fresco (5328 Rum Raisin and 5303 Cinder) when designing this beautiful hat. With 43 colors, you are sure to find a combo that will compliment your fall/winter coat. Just make sure that there is enough contrast in the colors for the Fair Isle.

Starting with a provisional cast on, there is a nice wide stockinette band that gets folded into the inside of the hat. This serves two purposes – one, it’s an extra layer of warmth for your ears and two, it keeps  the back side of the stranding nice and neat when you pull the hat on and off.

From there you move on to the Fair Isle section. Because it’s so much fun to watch Fair Isle progress on your needles, it goes faster than you might think. A couple of sittings (at most) and you will have a finished hat!

Another Fair Isle hat that I have been thinking a lot about for the past few weeks is our recent web letter pattern – Grapevine Hat. 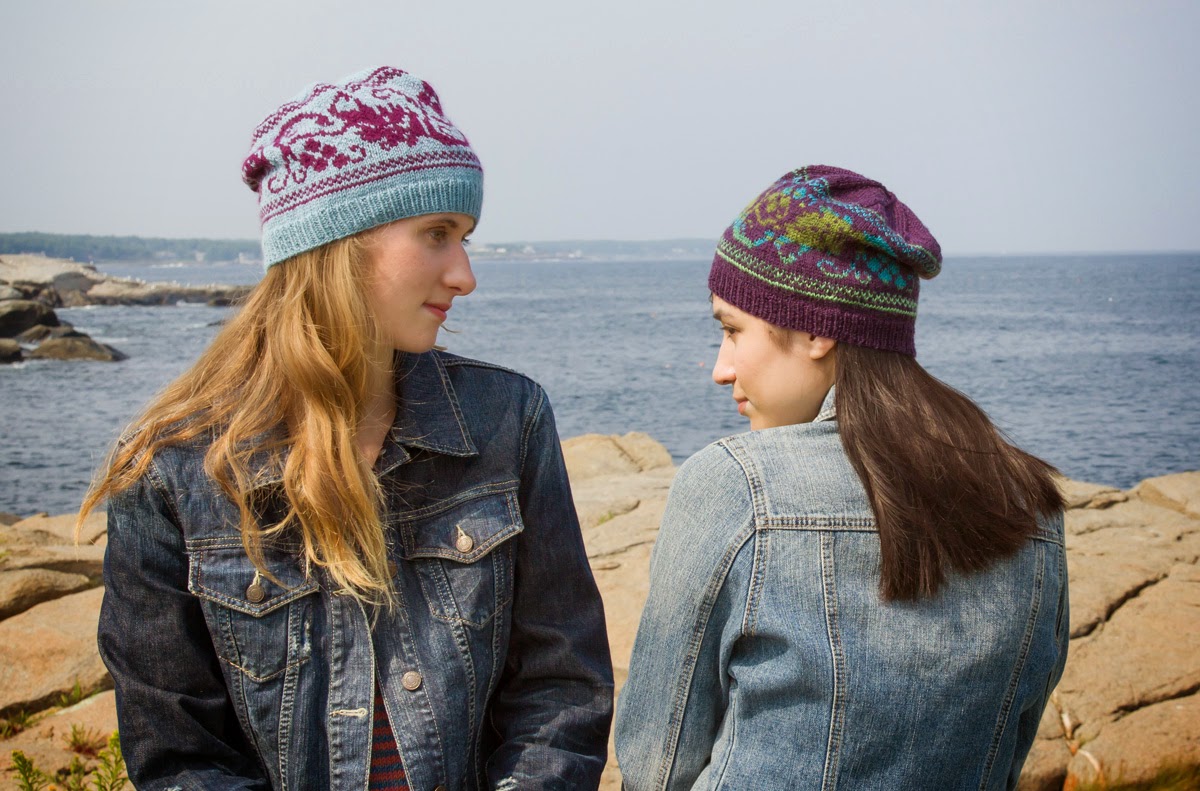 Amy Loberg designed this slightly slouchy hat to be knit in either Fresco or Liberty Wool Light. The gauge is interchangeable and both yarns are perfect for colorwork.

Another option is to use Fresco AND Liberty Wool Light combined! Use Fresco as your main color and one of the Liberty Wool Light Prints for the leaf motifs featured in the hat. The print colorway will do ‘extra’ work for you and make the pattern look more complex than it really is. Or reverse the yarns and have the leaves as the solid color with the print as the background. Fresco has a small amount of haze to it (because of the angora) which will soften the look of the print and give it a slight fuzziness.

If you are new to Fair Isle then a hat is a good place to start. Most hats are knit in the round and the knit stitch is much easier than the purl stitch in Fair Isle. There are many different techniques, but the one I like the best it to hold one color in your right hand and the second color in your left. It does take a little experimenting to get your gauge consistent on both hands. But once you get it down, you don’t have to worry about twisting the yarns as you go (which means less tangling). Carolyn wrote a great post about the technique here. Make sure to check it out.

Have you tried Fair Isle yet? What is your favorite method?