Had you planned to hand craft a gift, only to realize that the holiday party is suddenly 5 days away? Where did the time go and what are you going to do?

Never fear. There is still time. Even now.

This is, however, not the time for fine yarns and complicated patterns. You need something quick and beautiful in its streamlined simplicity. We have just the thing. To start with: Funky Chunky (from The Third Piece). This is 100% super soft wool. It is a super bulky weight yarn, but there's nothing else 'bulky' about it. Its construction makes it surprisingly airy and light.

Next, go to Ravelry and grab one of the free patterns from The Third Piece Design Team.or try Susan Mills' cowl from our latest Web-Letter.  'The Beacon Mitts', the 'Funky Chunky Cowl' and both 'The Soho Headpiece' and 'The Soho Turban Hat' require only one skein of yarn. 'The Kendall' calls for two skeins, one for the hat itself and another partial skein for the fun pom pom on top. 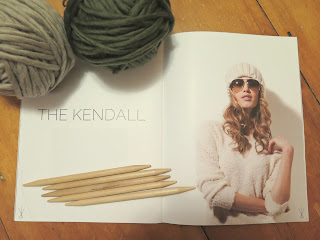 Grab your pair of large needles (patterns call for needles from size 11-17), settle into a comfy chair, and cast on. Two hours later (three hours tops) and you can have a super fashionable hand crafted gift to give. Who wouldn't treasure a gift like that?
Email ThisBlogThis!Share to TwitterShare to FacebookShare to Pinterest