'E' is for Everyone

Michael "Eddie" Edwards was an unlikely but courageous British ski-jumper. He had determination, but not much else going for him, except for a very supportive Mum (who is a knitter) who helped him to never stop "believing in himself -- even as an entire nation was counting him out."
"Eddie the Eagle" is a feel-good-cheer-for-the-underdog movie (release date 2/26/16) inspired by true events. "With the help of a rebellious and charismatic coach [played by Hugh Jackman], Eddie [played by Taron Edgerton] takes on the establishment and wins the hearts of sports fans around the world by making an improbable and historic showing at the 1988 Calgary Winter Olympics." 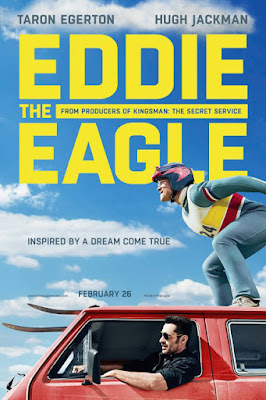 Join in on the fun and make a hat in support of Eddie! Grab your needles, and knit or crochet an "E" hat; you can find free patterns here (scroll down to the PDF links). Be sure to post a photo of your hat using the hashtags #iKnitForEddie or #iCrochetForEddie.

Susan knit this Eddie the Eagle hat using one marled and one solid colorway of Crestone. You could incorporate any letter you want by using the charts found here.
Our 'E' stands for Eddie, but it could also stand for 'Everyone'. Eddie's dream was to be in the Olympics. What's your dream?
Email ThisBlogThis!Share to TwitterShare to FacebookShare to Pinterest