It's so much fun to dip into Classic Elite Yarns' extensive pattern archives. On my last archaeological, fashion dig,  I kept coming back to these fabulous intarsia sweaters from the 1980s and '90s. All of these patterns are available for digital download from Patternfish.

I couldn't resist sharing some of my favorites. 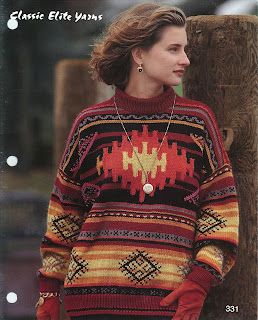 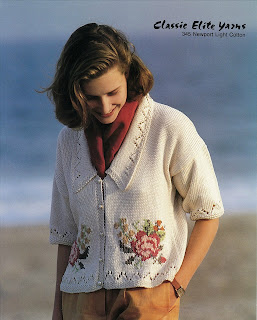 #345 Rosa Rugosa by Michele Rose in Newport cotton.
I knit with Newport in the mid 1990s, but now I love our Provence cotton even better.

Classic Elite's Creative Director, Susan Mills says intarsia motifs are favorites of designers as there are few limitations. You can think outside the box and not be confined to thinking only in rows. With intarsia, designers can become painters, putting color all over the place. She notes the challenges to designers (who can't quite find the colors they imagine in available yarn lines) and to knitters (who may be daunted by charts and lots of ends to weave).

But in the end, a completed intarsia sweater is an accomplishment that proves your knitting chops.

What's Susan's favorite intarsia design? This pullover from 1992 by Sofia Delaunay is the winner. Susan knit it for herself in '92 in La Gran. She wore it so much over the years, she completely wore it out! That's sweater love. 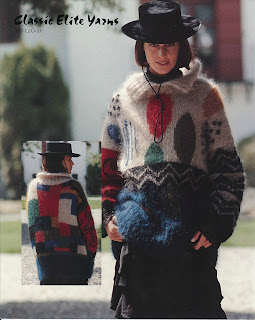 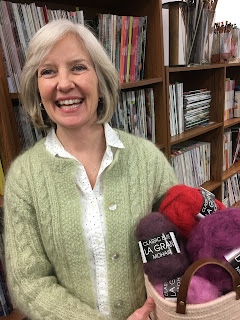 Please help us offer a warm welcome to the newest member of the Classic Elite Yarns' team -- Tracy Russell, Director of Sales!

Tracy has a wide ranging career in our favorite thing -- yarn. She's owned a local yarn shop in Baltimore, MD, was the wholesale manager for Cocoknits, and worked as an independent sales representative bringing lovely yarns from many companies to shops throughout New England.  She knows the yarn world from all sides and understands what knitters and crocheters want, knows want shop owners need and is creative about what a yarn company can be.

Like most knitters, Tracy goes through phases. She always seems to have a pair of socks, a sweater and some sort of accessory on the needles. If she's particularly stressed out -- it's garter stitch all the way! When moving from Baltimore to Boston while selling her yarn shop, she completed three big log cabin blankets.

What is she most looking forward to? Tracy says it's combining her experience as a knitter, shop owner and rep and looking at every situation from a variety of perspectives. That, and learning how this woman owned, small company runs. From selecting yarns, developing dozens of designs each year, the marketing and distribution -- there's so much to learn. And lastly, the people of course. For Tracy, it's all about the people, so working with shop owners across the country will be the best part of all.

Thirty years ago, on March 22, 1987 a nine-alarm fire ravaged and destroyed Building 7 of the Lawrence Mills Complex along the Merrimack River in Lowell, MA, causing $7 million in damage (in 1987 dollars).

At the time of the fire, Classic Elite Yarns was known as Elite Speciality Yarns and was housed in the mill complex in the Hub Hosiery Building across a narrow street from Building 7. The two buildings were connected by a second floor catwalk which became engulfed in flames. Firefighters poured enough water on the catwalk to keep the flames from Hub Hosiery and Classic Elite!

Jim Doyle, Classic Elite's Credit Manager and Buyer has been with the company for 33 years. His memories of the fire and their impact on CEY and its employees are vivid. Here's a bit of my conversation with Jim about that week back in 1987.

The alarm was called in by an off duty firefighter at about 5:40 PM. I was home having dinner and was either listening to the radio or watching TV when they broke in with a bulletin noting that there was a major mill fire in Lowell.  I got in my car, not knowing exactly where the fire was, as Lowell is full of mill buildings.  I lived about four miles from work and when I got on the highway I could tell from where the smoke was emanating that there was a chance the fire was nearby our offices and mill.

I got as close as three blocks from our complex and walked the rest of the way.  Our building was not on fire, but everything behind it was, with only a narrow alley separating buildings.  There were over 200 firefighters from ten towns in MA and NH fighting the fire.  On the street, I asked one of the firemen, who was pouring water on our building if he thought it could be saved, his answer was “50/50.”
Our building was saved, but everything on the two floors we occupied was wet, all of our inventory, mill machinery, and the office area.  If memory serves we just went about cleaning up with the help of service master crews and then getting hold of vendors to see what they could do to get fresh stock to us ASAP.  At that time we had many more domestic vendors than we do now, and most were able to work with us to get back up and running.
The impact was that about 200 plus people were not as lucky as we were and their businesses were devastated.  Several were never able to open again.  We were very lucky, and as is the case many times in situations like this, we just rolled up our sleeves and got to the business of cleaning up and getting up to speed as quickly as possible.
I can remember on the first anniversary of the fire we had a “Feast of the Fire” lunch.  We all wore plastic kiddie fire helmets and had several from the fire department drop by and share cake, and shared stories of that day, that I for one will never forget.